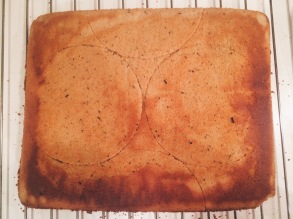 Schematic for a 3 layer cake

Off to the freezer 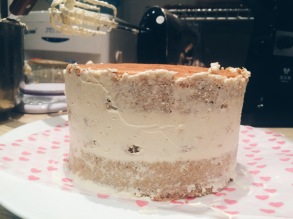 Crumb coat. Debated if I should make it a naked cake 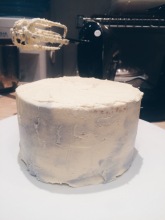 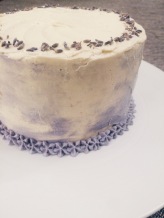 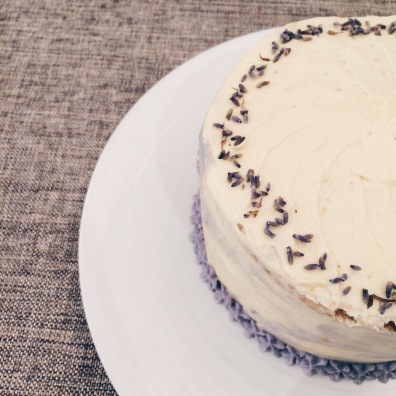 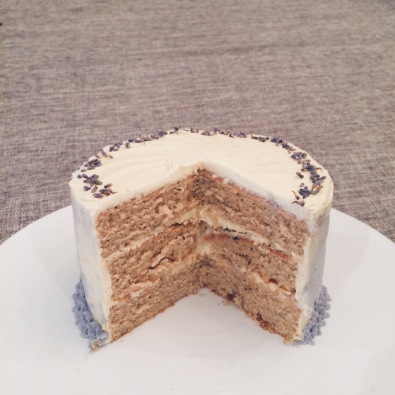 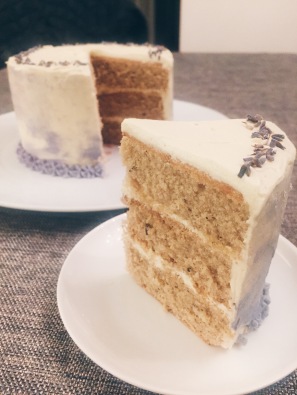 Time to eat!
Earl Grey and Lavender is surprisingly very popular. I’ve seen it around in cafés and have been dying to try it. I couldn’t really imagine how lavender tastes like, whether it will be like eating soap, and whether it pairs well with flavors like earl grey or honey. So when I stumbled upon some culinary lavender at a Japanese supermarket I had to try it out for myself.
I didn’t have an idea of how it was going to turn out, so I played safe and separated the flavors: earl grey cake with lavender buttercream. Just in case one of them did not work out. Both required infusing milk with earl grey or lavender.
In order to steep dried lavender into milk for the frosting, I went with a German buttercream. Instead of the usual butter+icing sugar concoction we are used to, the German buttercream is made by whipping butter into a custard base. I think I found a new favorite! It is as stable as the American buttercream, but much creamier, smoother, less sweet, and does not taste like pure butter. (I did only add enough butter to get a good consistency, and it turned out to be half of what the original recipe called for) The only downside is that it requires cooking and chilling the custard for two hours. Another tricky part is that the butter absolutely has to be at room temperature before incorporating into the custard. The first slice of butter I added was either still too hard, or the custard was too cold, and it did not blend well. I had to strain the mixture through a wire sieve to smoothen out the chunks. However, if you ever want a flavored buttercream that does not get overwhelmed by the amount of icing sugar required for texture, the extra work is definitely worth it.
Another thing I want to point out – layer cakes seem intimidating, but they are really not! If you are making a small layered cake, here’s a tip I learnt from Christina Tosi of Momofuku Milk Bar. Bake the cake in a 9 x 13 sheet pan, and when cooled, cut out identical circles. One of the layers will be imperfect, but just piece together pieces of cake to form a full circle. I marked out the schematic in the picture above. No cake leveler required, no multiple pans that don’t fit in the same oven, and the best part, all the leftover cake scraps that you can taste test! 😉
After you have your 3 circles of cake, it would be good to put them in the freezer for at least 10 minutes. It is a lot easier to work with cakes that are solid, not crumbly. Many bakeries pre-bake cake layers in advance, freeze, then frost as needed anyways. It has worked well for me too. The “thawing” process does not ruin the texture. In fact, frozen cakes maintain moisture amazingly. For this cake, I did not freeze it completely, just until the sides are firm and the cake won’t break. After that, sandwich the cake layers together with buttercream, and apply a thin layer of buttercream on all sides. This is called a crumb coat. Place it back to the fridge or freezer to firm up, then apply your final layer of buttercream. That’s how you get a neat, crumb-less finish on your layer cake.
Final taste test: loved the earl grey flavor, it came out so well with this recipe. When paired with the lavender buttercream, both flavors were mellowed, and neither was overpowering. For our first bite, we thought “ok… this is interesting…”, but then could not stop eating it. When the flavors developed even more the next day, it got even better. My family of 4 polished the 6-inch cake in 2 days… oops.
Earl Grey Lavender Cake
makes 1 9 x 13 rectangular cake, or 3 6-inch layers