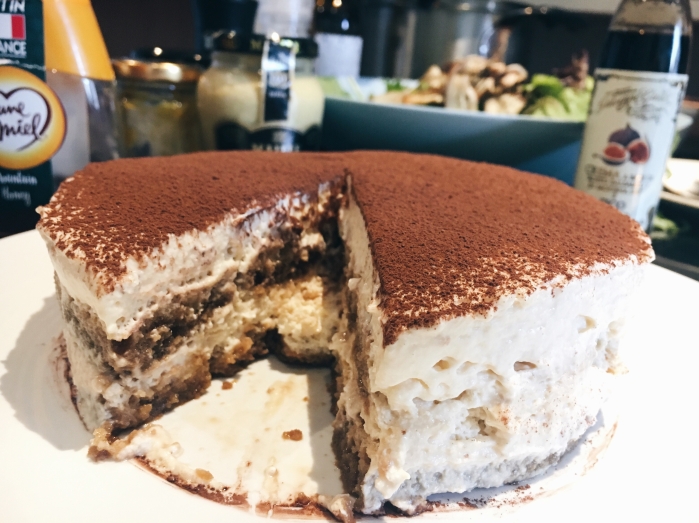 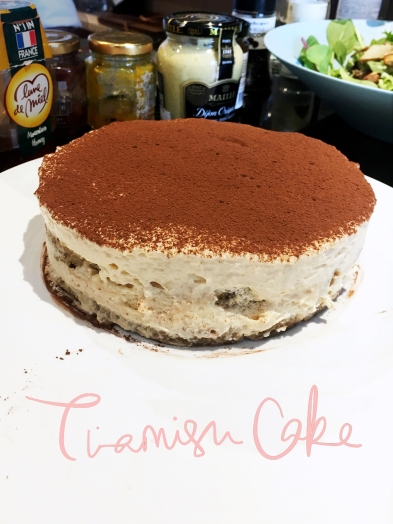 Same base as my go-to tiramisu recipe, but in round cake form. This post is mainly for baking round cakes this way (since bought ladyfingers are rectangular):

To make the assembly neater, cut each ladyfinger into shape to fit the round edges of the cake pan. Almost like a jigsaw puzzle when it comes together into a circle. Very  satisfying! Do this before soaking each piece in the espresso-rum syrup during the final assembly. Don’t worry if its not super exact, as it will expand slightly after the soak, and it’ll fill in nicely. This extra step does make sure that the cake edges of the tiramisu are even when the cake is unmoulded.

(I guess if next time you want to make homemade ladyfingers, you could just pipe them out in a circular shape from inside out)

I used a ring pan for this recipe, and wrapped the bottom in saran wrap. Don’t use baking paper as the espresso syrup may soak through, and we want something that can wrap around the ring pan on the outside. And make sure to place the whole thing in a larger cookie sheet pan so it can catch any potential leaks. Once its chilled it’s fine, but still serve out of the fridge when still cold. After unmoulding dust the top with cocoa powder for an elegant simple finish!