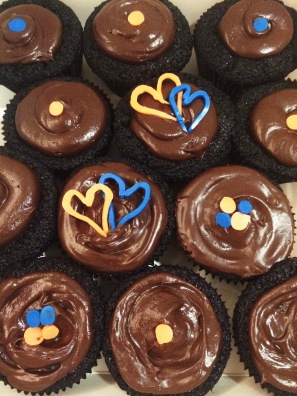 The original recipe came out of the Hershey’s box, and till today it is still my favorite chocolate cake recipe..! I have tried many recipes of chocolate cake, and I have to say this one is still the best. Turns out someone also did a full comparison (The Pancake Princess wrote a really awesome article comparing 12 different chocolate cakes here!), and I was fully convinced.

And it’s one bowl, too easy, and too good to be true. This is definitely the recipe I’d give everyone who asks for an easy recipe to make. They say the trick is in the coffee, but I say that the trick is that there really is no trick. No fear, just bake, and don’t distrust Hersheys.

After years of making this recipe, I cut the sugar to 1 1/3 cup instead of 2 cups in the original recipe, and it the perfect balance for myself and for people who’s tried this cake. I’ll write more about how to cut sugar in a separate post some other time. For now just try it out and enjoy!

For the frosting, I used a chocolate fudge icing from Gretchen’s Bakery – she’s also another baker that experiments with recipes in detail. Her fudge icing looks so lucious and glossy and chocolatey and I knew I wanted to try! Still on a lookout on how to replicate Awfully Chocolate’s nostalgic chocolate fudge icing. This fudge icing is pretty thick without being overly sugary, which is great for recipes like mini cupcakes, or to frost layers in between cakes. A little goes a long way, and it does leave people wanting more, especially the chocolate lovers.